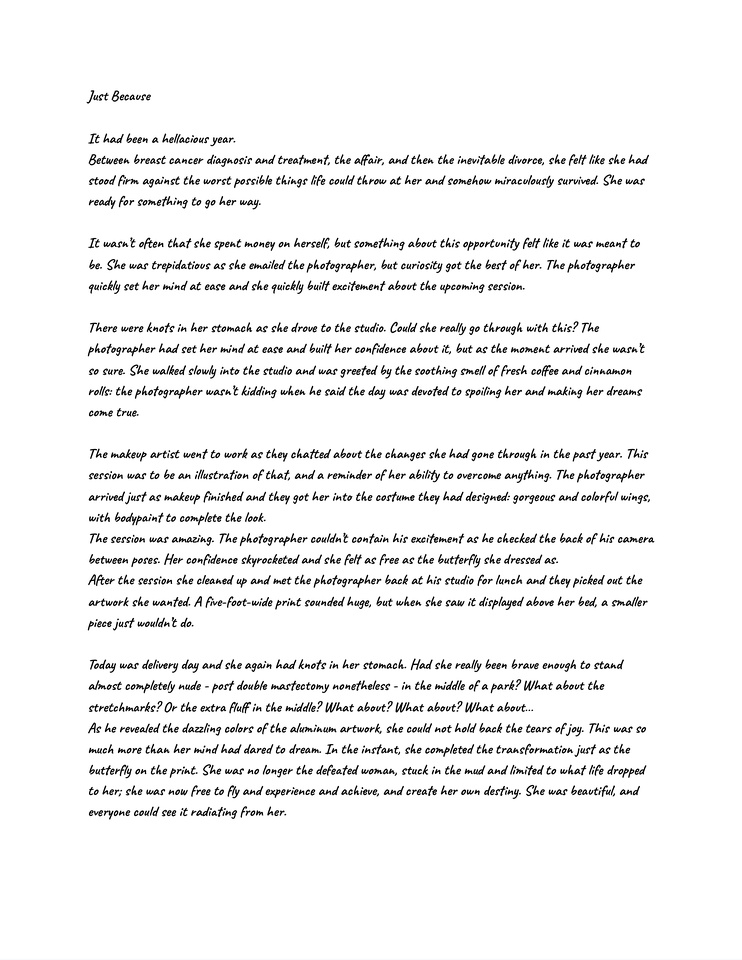 It had been a hellacious year.

Between breast cancer diagnosis and treatment, the affair, and then the inevitable divorce, she felt like she had stood firm against the worst possible things life could throw at her and somehow miraculously survived. She was ready for something to go her way.

It wasn’t often that she spent money on herself, but something about this opportunity felt like it was meant to be. She was trepidatious as she emailed the photographer, but curiosity got the best of her. The photographer quickly set her mind at ease and she quickly built excitement about the upcoming session.

There were knots in her stomach as she drove to the studio. Could she really go through with this? The photographer had set her mind at ease and built her confidence about it, but as the moment arrived she wasn’t so sure. She walked slowly into the studio and was greeted by the soothing smell of fresh coffee and cinnamon rolls: the photographer wasn’t kidding when he said the day was devoted to spoiling her and making her dreams come true.

The makeup artist went to work as they chatted about the changes she had gone through in the past year. This session was to be an illustration of that, and a reminder of her ability to overcome anything. The photographer arrived just as makeup finished and they got her into the costume they had designed: gorgeous and colorful wings, with bodypaint to complete the look.

The session was amazing. The photographer couldn’t contain his excitement as he checked the back of his camera between poses. Her confidence skyrocketed and she felt as free as the butterfly she dressed as.

After the session she cleaned up and met the photographer back at his studio for lunch and they picked out the artwork she wanted. A five-foot-wide print sounded huge, but when she saw it displayed above her bed, a smaller piece just wouldn’t do.

As he revealed the dazzling colors of the aluminum artwork, she could not hold back the tears of joy. This was so much more than her mind had dared to dream. In the instant, she completed the transformation just as the butterfly on the print. She was no longer the defeated woman, stuck in the mud and limited to what life dropped to her; she was now free to fly and experience and achieve, and create her own destiny. She was beautiful, and everyone could see it radiating from her.

MDKauffmann Photography provides one of the Best Photography experiences in the St. Louis Area. Matthew specializes in wedding photography and portraits to create timeless artwork and memories.

Matthew is a proud to be one of the top 3% of photographers worldwide designated as a
Certified Professional Photographer and a member of the St. Louis Hero Network.
I exist to tell your story through timeless artwork you'll be proud to display for generations.
Today an event. Tomorrow a memory. Forever an heirloom.