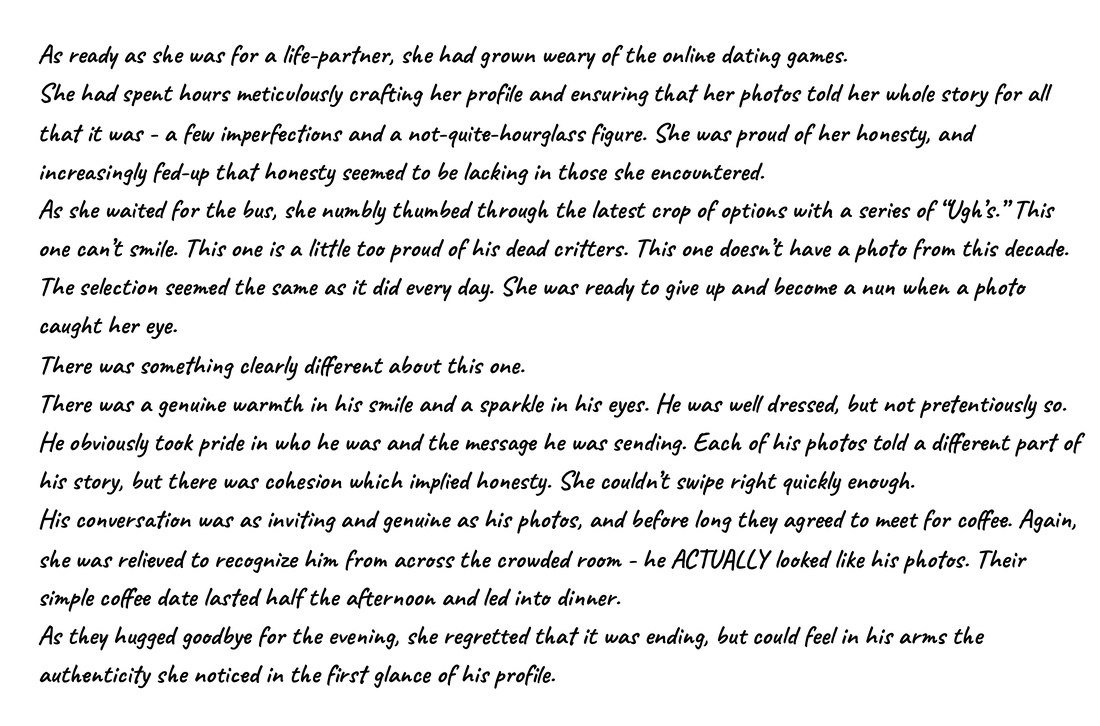 As ready as she was for a life-partner, she had grown weary of the online dating games.

She had spent hours meticulously crafting her profile and ensuring that her photos told her whole story for all that it was - a few imperfections and a not-quite-hourglass figure. She was proud of her honesty, and increasingly fed-up that honesty seemed to be lacking in those she encountered.

As she waited for the bus, she numbly thumbed through the latest crop of options with a series of “Ugh’s.” This one can’t smile. This one is a little too proud of his dead critters. This one doesn’t have a photo from this decade. The selection seemed the same as it did every day. She was ready to give up and become a nun when a photo caught her eye.

There was something clearly different about this one.

There was a genuine warmth in his smile and a sparkle in his eyes. He was well dressed, but not pretentiously so. He obviously took pride in who he was and the message he was sending. Each of his photos told a different part of his story, but there was cohesion which implied honesty. She couldn’t swipe right quickly enough.

His conversation was as inviting and genuine as his photos, and before long they agreed to meet for coffee. Again, she was relieved to recognize him from across the crowded room - he ACTUALLY looked like his photos. Their simple coffee date lasted half the afternoon and led into dinner.

As they hugged goodbye for the evening, she regretted that it was ending, but could feel in his arms the authenticity she noticed in the first glance of his profile.

MDKauffmann Photography provides one of the Best Photography experiences in the St. Louis Area. Matthew specializes in wedding photography and portraits to create timeless artwork and memories.

Matthew is a proud to be one of the top 3% of photographers worldwide designated as a
Certified Professional Photographer and a member of the St. Louis Hero Network.
I exist to tell your story through timeless artwork you'll be proud to display for generations.
Today an event. Tomorrow a memory. Forever an heirloom.